As part of the joint project "FueLS", the e-learning group of the TU Darmstadt, together with colleagues from the Darmstadt University of Applied Sciences and the Goethe University Frankfurt, is working on the media-didactic and -technical conceptualization and creation of virtual teaching and learning scenarios using 360°, augmented reality (AR) and virtual reality (VR) technologies.

The goal of the “FueLS” project is to design “Future Learning Spaces” in which physical and digital spaces and elements blend differently in various scenarios. 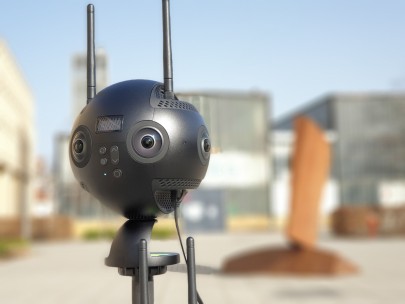 For example, the physical space of a laboratory or locations are enhanced “on demand” with digital information and learning content during an excursion; on-site courses of actions are supported with the help of assisted reality approaches. 360° environments enable flexible preparation in the virtual equivalent of the real space (e.g., laboratory, workshops) and thus more efficient learning time on site. VR and AR scenarios put forward new possibilities — for example, studying and teaching in hybrid spaces in which one can learn and teach in a collaborative and distributed, simultaneous and time-shifted, individual and joint manner.

On top of the development of the spaces and scenarios, the project includes the joint development of qualification, counseling, and support services for teachers and students of all departments.

“FueLS – Future Learning Spaces” is a joint project within the framework of the Hessian funding program “High Quality in Studies and Teaching, Good Framework Conditions for Studies” (QuiS).

The focus of work in 2022 is on the development and implementation of teaching and learning scenarios in a 360° environment.

A total of three protoypical scenarios are didactically planned and technically implemented by the FueLS team of the E-Learning group at TUDa.

The 360° scenarios are located in the Departments of Biology, Physics, and Directorate VIII – International Affairs.

The following projects are implemented this year and are planned for practical use in teaching in the winter semester 2022/23:

The two MockUp videos provide a glimpse into the Future Learning Spaces.

They look into the future of the project and deal with possible thematic and didactic areas of application in teaching.

The “taxonomy” developed by the FueLS team of the E-Learning group helps with the didactic classification of the envisaged learning scenarios and can already be used in the new development of 360°, AR, and VR learning scenarios or in the context of counselling.